Many thanks to Pure Flix for providing a sample of the product for this review. Opinions are 100% my own.

There’s a local radio station that I love. The music is what really appeals to me, but there are times that the hosts are hilarious. I’m always impressed at how well they get along and they truly seem to enjoy what they’re doing. Do you have a favorite station? 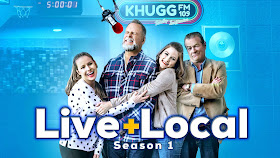 Have you ever wondered what happens behind the scenes of an early morning radio show? “Live+Local” on Pure Flix is one possible take on the experience talk show hosts have on the radio before and after what we-the listeners-hear on the show. As I was watching episode 5 of “Live+Local”, I couldn’t figure out who one of the actors was…he sounded so familiar but I couldn’t place his face. That’s because he is a tad older than he was when he starred on “Full House”! It’s Dave Coulier! It was fun to see him in a different setting.

Episode 5 relates well to our current economy with concerns of job instability and power shifts. During the episode, the actors share scripture verses, inspiration thoughts and motivation. It is filmed in a documentary manner, so if this is a style of film you enjoy…check it out!

If you would like to try out Pure Flix, you can sign up for a free trial, or you can enter my giveaway below to win 3 months of Pure Flix streaming.